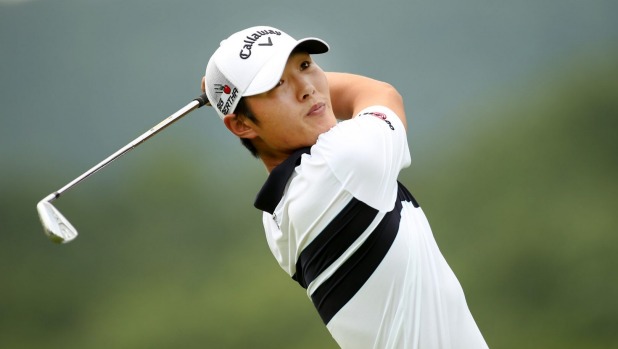 New Zealand golfer Danny Lee is crediting his new coach for his breakthrough win on the US PGA Tour.

While basking in the glory of his playoff win at the Greenbrier Classic on Sunday (NZT Monday), the 24-year-old said linking up with American coach Drew Steckel in March had proven to be game-changing.

A prodigious talent – he was the youngest US Amateur champion in 2008 – he has taken a long time to settle into the rhythm required to be consistent on the sport’s toughest tour.

“Meeting my new coach, it was a big life-changer, I should say,” a beaming Lee said.

“My swing got so much better. I never really was happy with my golf swing when I was young.”

“I’m still young. When I was a teenager, I wanted to swing like Tiger Woods or Justin Rose, that kind of swing. I’ve probably gone through 100 coaches, and meeting Drew Steckel was the best thing that ever happened to me.”

Lee has rattled off five top-25 finishes since their combination began.

It’s a long way from the horrors of 2012 when he missed 13 of 26 cuts and lost his PGA Tour card, and his sense of direction.

“I just played horrible that year. I didn’t know how to hit a golf ball because there were so many things, so many thoughts and things in my head, and I was putting it poorly, as well,” Lee said.

“I was going through a rough time, but my parents were supporting me really hard.”

Acknowledging his New Zealand links, US commentators were also quick to pick up on Lee’s Korean background as he held his nerve to beat David Hearn, Kevin Kisner and Robert Streb in a four-man playoff to earn his first PGA Tour victory.

“As soon as I [stood] on the 18th tee box, first playoff [hole], I felt ready. I felt like I could really win this thing. It was amazing,” Lee said.

The NZ$1.8m winner’s cheque helped lift him to 15th in the FedExCup points race and saw his world ranking jump from 152 to 78.

He is assured a place on the tour for two seasons, and a place in the PGA Championship, the year’s final major.

He will play next week’s British Open at St Andrews in Scotland and qualifies to play at the US Masters next April.